When peroxide is added to water a large amount of dissolved oxygen is released and a powerful oxidizing effect occurs. Coliform and iron bacteria are killed, and tannins are oxidized. This type of iron filter system handles the absolute worst type of water reliably and effectively.

Hydrogen peroxide holds an advantage over chlorine as a well water disinfectant due to its chemical makeup. It disinfects through oxidation, splitting into oxygen and water. In the case of well water treatment, there is often bacteria that cannot be eliminated by chlorine.

According to Essential Water Solutions, “As effective as chlorine is as a disinfecting agent, it’s only marginally effective in reducing the odors from sulfur or reducing iron bacteria, iron or manganese.” 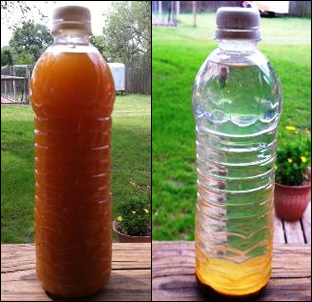 Iron Water before and after treated with Hydrogen Peroxide

The iron solids quickly settle out and are now easily filtered. Iron bacteria are sterilized and the water is ready for the Catalytic Carbon filter for further purification.

Manganese is a metal similar to iron in properties, but oxidizes to a black color instead of orange. It will cause black stains in your toilet and fixtures, but it also feeds some odor-causing bacteria.

Iron Bacteria is nasty and consumes dissolved iron. They may colonize in your filtration system, water heater and water lines causing a foul odor and causing equipment to fail. 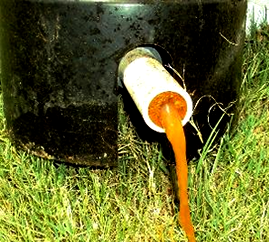 Hydrogen Peroxide sterilizes iron bacteria as well as oxidizing and removing the dissolved iron they feed on, and will also remove the bacteria residue from your water lines over time. Iron bacteria problems are one of the most common problems, and one of the easiest to fix.

To the left is a photo of an Iron Filter which had become overwhelmed. Hydrogen Peroxide treatment was able to completely fix the problem.

Q: Why use Hydrogen Peroxide instead of Chlorine or Bleach?

A: Chlorine/ Bleach (sodium hypochlorite) is a very effective oxidizer. However, it produces a bad taste, smells bad and produces toxic residuals (trihalomethanes) which are known carcinogens. Hydrogen Peroxide is a clean, environmentally friendly alternative to chlorine/bleach and produces none of these effects.

Q: How much maintenance is required with a Hydrogen Peroxide system?

Q: Can I keep my existing water softener?

A: The South Florida Water Hydrogen Peroxide Filtration system works with pre-existing filtration equipment. Water softeners are designed to remove calcium / minerals, but may be fouled by iron and bacteria. The softener tank can be emptied, sterilized and repacked with new Ion exchange resin media or a new system purchased.

Q: How safe is Hydrogen Peroxide in my water?

A: Very safe – For example: the 3% Hydrogen Peroxide you purchase at the local drugstore will say that it may be used as an oral debriding agent, they instruct you to mix with one part water and rinse or gargle to kill bacteria in your mouth. Bleach is never recommended to be used as a mouthwash in any concentration so why treat your well water with it?

Q: Why not just use Chlorine / Bleach and remove them with Carbon?

Q: Can Hydrogen Peroxide handle a large volume of iron?

A: Yes – Hydrogen Peroxide quickly reacts with dissolved iron, changing it from “Ferrous” iron to “Ferric” iron. This means that the iron is converted from “dissolved” to “solid” in a fraction of a second. Once the iron is oxidized and becomes a solid, it is easily filtered. Large volumes of iron require substantial filtration, but good clean iron-free water will be the result. 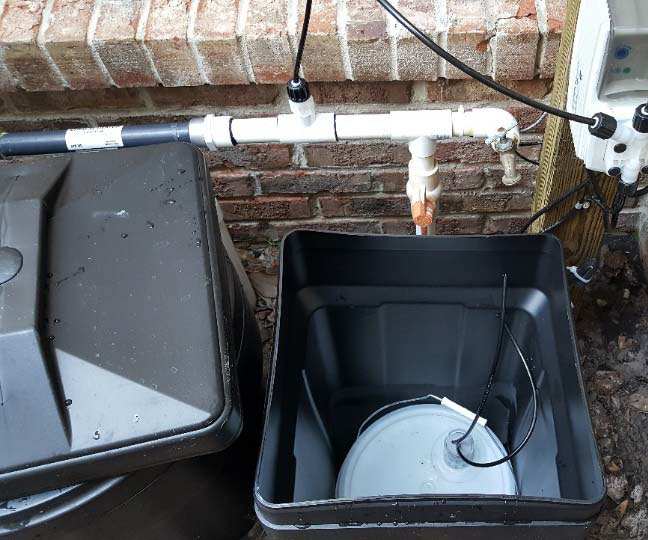 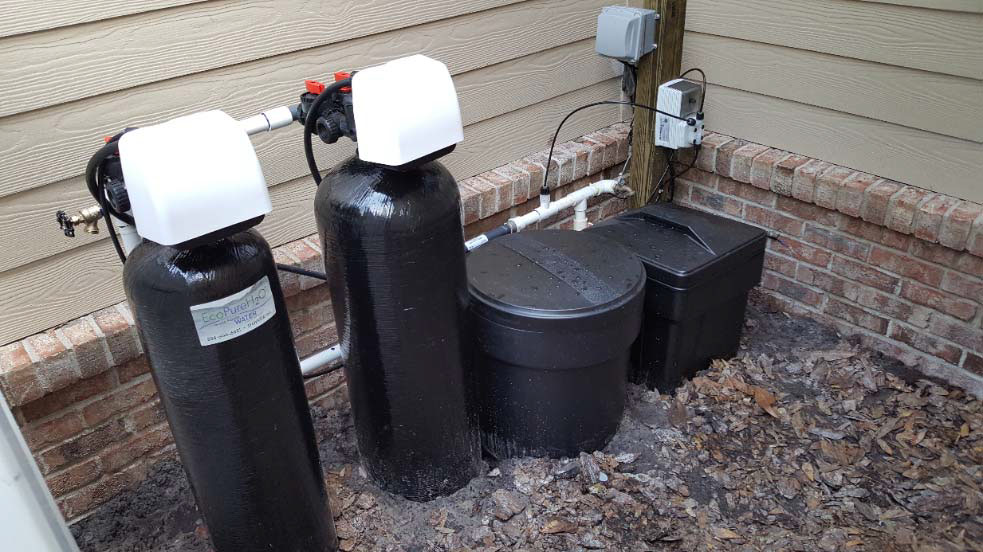